Heavenly aroma is emanating from my oven!  If aroma is any indication of taste this is going to be wonderful!  Abuelita Marble Cheesecake is in the oven now and I am anxiously waiting to see how it turns out.  But if my taster is any good at all this is going to be a wonderful blend of mild chocolate and just a touch of cinnamon flavored cheesecake, a wonderful Mexican flare! 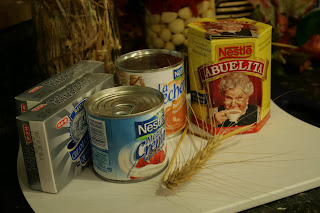 I was concerned that since it is a cheesecake it was going to be a challenge but really the only challenge was the gathering of the ingredients which were not the typical items on my pantry shelf.  I found most everything I needed at my local grocery store in the aisle where I normally find the evaporated milk and instant cocoa mixes. I am including a picture of the items for those of you who are, like me, visual. 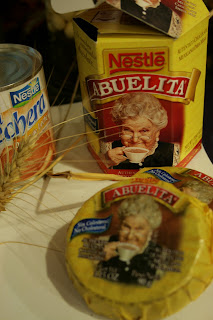 And in case I have forgotten Abuelita is Spanish for little grandmother, a term of endearment!  How sweet is that.  It makes me feel all warm and fuzzy thinking of the sweet little grandmothers loving on their babies!

Now that I am better informed about these products I will not skip over those recipes I find using them.  Next week I am looking into an English chocolate brownie-like bar cookie that uses "digestive biscuits" and "maltesers".   No worries!  I will have it converted over to English for us....uh....I mean Americanized English!

FOR CRUST:
COMBINE cookie crumbs, butter and cinnamon in medium bowl. Press onto bottom and 1 inch up side of 9-inch springform pan. Bake for 6 to 8 minutes (do not allow to brown). Cool on wire rack.

BAKE for 1 hour, 15 minutes or until edges are set but center still moves slightly. Remove from oven; cool in pan on wire rack for 15 minutes. Refrigerate for several hours or overnight before serving. Remove side of pan. Top each serving with whipped cream; serve immediately.
Serving Size: 12
Posted by Darla at 8:31 AM