I had to laugh at our family dynamics Sunday at the shower.
While Mama and Linda were mixing up the punch I would come along behind them and throw the sherbet containers in the trashcan.  I don't think Linda would have dug through the trash for them but she certainly did not want them in the trashcan.
I was trying to keep the clutter down by putting the empty containers in the trashcan.
Linda and Mama were concerned with saving them for some future use.
Linda announced to me she was her mother's child.
Mama said I was my grandmother's child.
I think she meant her mother-in-law, my father's mother.
Today, I found their stash! 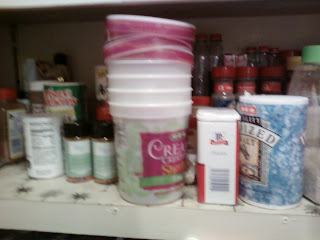 Between the pepper and paprika there they sat....the sherbet containers minus the two from the trash!