Why is it that as soon as you sweep the last little bit of the dirt into the dustpan and dump it in the trash you simultaneously kick the cat bowl and water dish and have a wet, cluttered mush all over the floor?

...as soon as all the underwear are folded and stacked on the table, the last pair of underwear tip the scales and the whole stack tumbles over and unfolds?

...the short trip from sugar bowl to coffee cup ends with the sugar on the floor below.

...the cups on the top shelf of the dishwasher are filled with water when all the other dishes are dry and topple over spilling into the utensils and dishes below as you pull the rack out?

....the bottom sheet pulls loose but the sheets above it are still in place?

But all is well and if the house is not perfect when all the little grandbabies come running in...who will even notice?
Posted by Darla at 5:18 AM 3 comments: 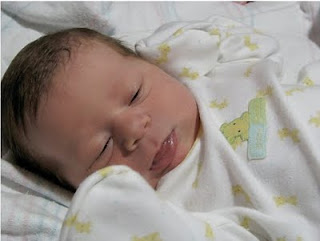 This is the first photo taken minutes after she was born. 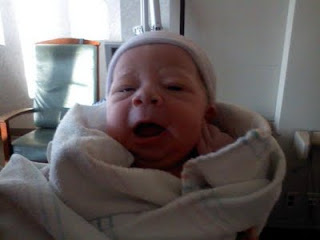 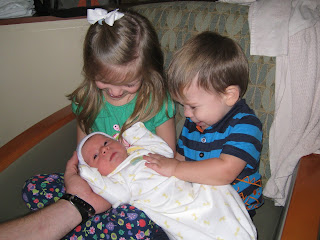 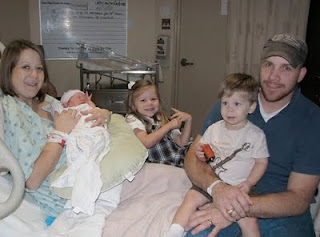 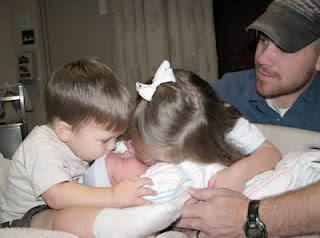 As the rays of sunlight broke across the eastern sky the sound of rumbling combines started and I could feel the vibrations of the machinery nearby. The sky was just light enough to see the combines near my back door, starting up and moving across the field of green beans growing just at the edge of my backyard. The harvesters must have arrived while it was still dark and moved in like Hitchcock's birds in the school playground.

As I sat having my morning coffee while I watched an old movie on TCM my senses became aware of the activities outside and momentarily I felt as if I had been plucked up from my serene country life and plopped down in one of those B rated scary movies where the victim of some unknown killer runs through the corn fields with menacing rotating blades of a combine moving closer and closer.

Stepping to the backdoor I watched as the combines took their place at the start of the bean rows and dust began to rise and billow out into the sky as the green plants began to get ripped from the ground and pulled into the blades of the combine.

Harvest is exciting to farm families. It is the time the goals are realized, the big pay off, the light at the end of the tunnel, the end of the hard work that went into that crop, a big relief. For this year, especially we are thankful for all that is harvested, the summer of drought, the wet fall, a struggling economy, and an uncertain future. I am reminded that faith has got to be a part in our lives. We can plant the seeds but God gives our harvest.

There are several harvests of various crops throughout the year. This is the second harvest this year of green beans, corn was harvested early in the summer, hay has been baled and peanuts are being harvested this week, also.

Harvest time and a baby on the way. What a good day it is today!
Posted by Darla at 8:52 AM 1 comment:

Living by the Old Tme

What a challenge it has been this week to get the time right.

All this week my internal alarm clock has been waking me up at 4:00 AM because it is the old 5:00 AM. I toodle to the TV downstairs to catch an old movie, put on the coffee, take my morning pills and settle down to the movie until time to go to school. .

Today my internal alarm clock got me up at 5:00 AM which is right for me even though it is Saturday, I toodle downstairs, turn on an old movie, put the coffee on, take my morning pills and settle in to my old movie.

Lee wanders in....awfully early for him....five o'clock.
He thinks it is six o'clock and that is good for him because he thinks it is the old seven o'clock.

The Math of Love

Makes you just hurt for her!
If things do not happen before next Wednesday she will be admitted and induced on the 11th.
It is my prayer that things happen sooner than that for Lisa's sake.

Nine months is long enough to be pregnant for anybody with a three year old (4 in February) and a 20 month old at home with a husband who is out of town on business for days at a time. Poor baby! She is trying not to be grumpy but it is just so hard!

When I went into labor with my first I was eating out with a friend who had a five month old baby. I fed the baby all the way to the hospital. It was either I drive or I feed. I chose feed. Our two babies were friends for life, competed for grades all through their years in Pleasanton, graduated the top two in their class, roomed together at college and continue to keep up with each other even now.

By the way, the meal was Mexican food and I never got to finish the meal.

The second one came a week early and when I got to the hospital they gave me a sleeping pill and all labor stopped. Hours later it started again and he was born in two hours.

The doctor decided to induce the last two I had. He did not think I would make it to the hospital.
The next one was born during my mother's father's funeral. I missed the funeral. It was a happy/sad occasion.

By the time I had the last one I had it down pretty pat! Everything went as scheduled!

What a blessing all the babies have been in my life. I would not want to give any one of them up, mine, their spouses and the grandbabies.

Someone once told me she did not want to have any more children after her one child because she did not think she could ever love another child as much.
How sorry I feel for her. She did not understand the math of love!

You don't divide, you multiply!

So if you please, say a prayer for Lisa and the baby.
Posted by Darla at 5:39 PM 1 comment: