Living for the Weekend

I hate to admit I live for weekends but...
I live for the weekends.

Now the younger crowd says they live for weekends and they mean it in a completely different way than I do. They live for weekend parties, nights out, cruising chicks (do they still say that?), concerts, going shopping in the malls, and no telling what else. They just want to fill up their weekend schedule with a continual search for fun. And I am sure they think they have found it but really.....

I am sure there was a time in my life that most of that stuff may have interested me...not all of it, mind you, but some of it. As I got older my weekend parties became watching a movie with the grandsons until way late sometimes as late as eleven, nights out became a quick drive into town to pick up pizza, cruising chicks became surfing the internet, concerts became listening to the boys playing guitar hero, shopping in the malls became history and puttering in the garden ruled.

Slowing down?
Nope! I am more active and busier than ever but it is just directed differently and I don't think I have ever been more satisfied with my life.

Twenty years ago, I would never have believed it.

This weekend will be filled with family! What fun!
Posted by Darla at 9:55 PM 1 comment:

Okay, God, I'm listening.
I know there must be a lesson here to learn.

We were given a great opportunity that would be great PR for Caleb's business, and for my personal growth as an artist. Now here on the threshold of opportunity a kink (a lost shipment of frames we were going to use.) was thrown into the works which limits the selections we will be able to show. We still have several pieces to show but not five of my newer pieces that have never been framed.

Disappointed in this on several levels I know God must be speaking to me. There must be a lesson to learn here that has escaped my attention.

Maybe, it is to stop and count my blessings and realize that it is through God that any opportunity is presented to us or to be patient to wait on God's timing or something like that. After all it was just last week that Caleb and I did a presentation to the Woman's Club, a smaller group than tonight's group will be but a wonderful group of woman. Although disappointed it is not life changing.

I do find it interesting that God is allowing the opportunity but he has limited the pieces we will show in it.
I wonder what he wants me to realize.
Posted by Darla at 5:28 AM 2 comments:

Email ThisBlogThis!Share to TwitterShare to FacebookShare to Pinterest
Labels: Gods Voice My Ear

What would you put on a grasshopper to eat it?

I love playing Loaded Questions. We have played the game a number of times and always enjoy it. We played with our friends on Saturday night.
It never fails that when we play the game we always laugh throughout the game.
The game really is a ice-breaker type of game and you really get to see how people think by their answers.

Question:If you can give yourself something luxurious what would it be?
Answer:(Enough milk to make the mashed potatoes smooth, Jackie?)

Question:Where would you hate to find yourself in the morning?
Answer:(In the back seat of the neighbor's car?)

Okay, so you see why you might be laughing when you play the game.
Sometimes the truth is funnier than fiction!
And under no circumcisions will you find me eating grasshoppers.
Posted by Darla at 5:58 AM 2 comments:

A Valentine from Nana

A special note to my grandchildren:
Special treats when next we meet!
I love you!
Love, Nana 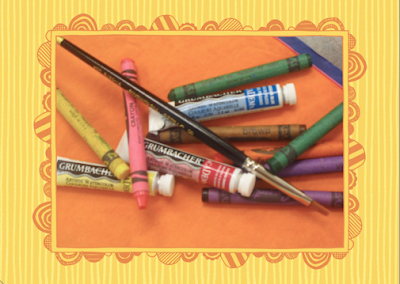 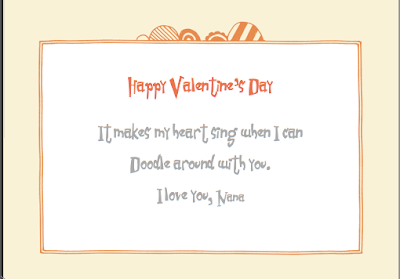 (And to all of you special family and friends out there. I hope today is full of fun surprises for you and you feel warm and loved. I daily thank God for your friendship and love. I love you.)
Posted by Darla at 5:46 AM 2 comments:

Let's see? Is it too soon to start counting the days until school is out?

I took off for half a day today because Caleb and I had a presentation to make to the Woman's Club....like I have something to say? Well, it worked out well and it was really good PR for Caleb's business and it was an ego trip for me. The group of women was a very sweet, very receptive and very gracious group of women.

I wonder how I get myself into things like this when I am preparing myself to present. Last July while I was in North Carolina visiting my sister I got a call asking me to speak to the club. I could not imagine what they would want with me but when she suggested that I do a presentation with Caleb I accepted. Well, actually, I don't think I ever actually accepted. I just sort of did not decline. There is a difference! And I guess every time I stand in front of women and talk I grow in some sort of way. It helps to build confidence. I listened as one of the women led the group and she was so at ease with speaking to the women. She did not stammer or do the "ah-h-h"s to fill in the gaps. That is an important part of public speaking you know. You can not fill in the blanks with "ah" or else you start to lose people.

When I got home still early, I put on lounging clothes...okay, a big ugly tee shirt and my oversized pajama bottoms. I turned on TCM to an old movie, swept the dust off of the tables, swept the floors, vacuumed the rug, put a chocolate cake in the oven and sang out loud on a whim.

I could get used to this!
Posted by Darla at 6:20 PM No comments:

Email ThisBlogThis!Share to TwitterShare to FacebookShare to Pinterest
Labels: Just for Fun

Overheard in passing between two girls.
The first girl was intent on telling the second girl a story in which she obviously thought an injustice had taken place,
"...and I was being-haved and she just....."

The phrase hit a sore note in my head and obviously in the friend's head, "being-haved?....being-haved?" The story was completely lost on the friend who was now stuck on the distorted phrase and was repeating it to herself in an attempt to set it straight in her own mind.

The first girl continued talking as she walked on, never hearing her friend stumbling over the distortion.

I could not help but be amused. Maybe I was just looking for something to make me smile but I laughed and thought that sounds like a mistake I might make.

Some words just sound like they can be twisted more than others and behave is one of them.
I always thought it a strange word but this use made it even stranger.

Oh, it was an English class in which the injustice took place.
My guess is that the girl was sleeping. I hope she is not taking the ACT tomorrow.
Posted by Darla at 8:59 PM 3 comments:

Email ThisBlogThis!Share to TwitterShare to FacebookShare to Pinterest
Labels: Just for Fun

A Moment of Silence

Every morning at school, before the announcements but after the pledge we have a moment of silence that lasts for one full minute. This falls at the beginning of my day when I start my first class and everyone is in the room. There we stand no one speaking, complete quiet in the art department. The only minute for the entire day that is still and quiet.

Being a praying woman I often neglected this moment thinking this time was not my time to pray. Instead I might have used it for reflection of the coming day or to discretely take attendance or whatever I needed to do in silence. After a few frustrating days I decided to reinstate this time of prayer before the announcements but after the pledge. It was only at this point of frustration that my desire not to be teaching these vain, selfish teens that I became willing to turn it over to God. I pointedly directed my prayers to my students needs. I prayed for my children who are away from me, my grandchildren, my family. I prayed for my students that they would be receptive, ready to learn, obedient....and then I prayed for myself, that I may be able to be peaceful, act according to God's will, have a ready answer to their questions and that I may be able to contribute to their needs.

Now it is an important part of my day like my coffee time at the end of the day with my parents. I start my work day with a small talk with my Father.

Interesting fact: my days are more peaceful, children more receptive, ready to learn, obedient, talking to me about current events, moral dilemmas and sometimes about art. I have learned to love my students.

Listening to the presentation of a proud father speak of the his work in India and of his daughter's touched my heart at the zeal and the unselfishness of this young woman. Many young people are still struggling to "find" themselves at her age. Their desire is often worldly and surely selfish, often with a list of things to do and buy to satisfy their wants with little regard for those less fortunate in life.

Rebecca grew up just like the rest of our children from church. She made a couple of trips to South Africa on missionary trips while in college. That must have just whet her appetite for ministry. The thing that impresses me is not that she is in India but it is her desire to ministry to the needs of people less fortunate. The thing that impresses me is that she has found her talent and is not burying it. She intends to use it for God.

While many woman will shrink back and be timid she is forging ahead to blaze a trail. It is my prayer that as Bekah ministers to the needs of the people in Otty that she will touch their hearts with her zeal for God.

I am impressed. Read her blog. I plan to keep up with it.
(Clicking on the title of this post "Bekah in Otty" will take you to her blog.)
Posted by Darla at 6:51 PM No comments: