I never had cravings while I was pregnant but the changing of seasons brings out cravings I can hardly control.
It all sounds very psychological but real nonetheless. Memories of pleasant times and comforting foods at those times make an indelible mark on our minds and replay like an old movie reel in our memories.
With the cooling of the weather lately my cravings are very active today.

The latest issue of Southern Living reminded me of the apple dumplings my mother served when we were children. The magazine did a mother/daughter adaptation of the old recipe. I drooled at the full color pictures of both versions of the apple dumplings and while the daughter's version cut the preparation time in half did look enticing I knew the mother's version is most appetizing. Mother's recipe used fresh apples, a homemade syrup and of course, the homemade version of the pie crust pastry.

Being the busy woman that I am but one who loves to eat good food, I quickly adapted the mother's recipe into my own version cutting time slightly by buying the pie crust instead of making it myslef and had fresh apple dumplings baking in my oven within minutes.

Oh, the smell of apples baking in your kitchen. I could hardly wait for the dumplings to cool before diving into the sweet fruit. 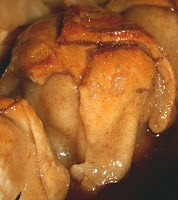 Apple Dumplings Darla's Way
Purchase small apples, peel and core about 6
Make or buy pie crust but each apple needs about a 6 inch square to wrap the apple.
Set one prepared apple in the middle of a square of pastry and fill the hollow core area with a mixture of brown sugar and a dash of cinnamon (about a tablespoon of sugar mixture) and top with a small dab of butter.
Bring the edges of the squares up to meet in the middle allowing the rest of the pastry to ruffle around the apple.
Place in a shallow baking dish that will hold 6 apple dumplings.

Prepare a syrup by mixing in a saucepan:
1 1/2 cups sugar with 1 1/2 cups water and a teaspoon of cinnamon.
Bring to a simmer and simmer for five minutes.
Pour syrup over dumplings in baking dish.

Do you have a good apple recipe you would like to share? Or a favorite fall memory?
Posted by Darla at 2:20 PM