Cappy's for a Good Time 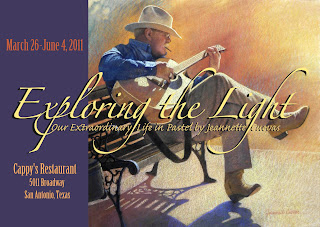 What a fun evening we had last night at Cappy's Restaurant!
Congratulations to Jeannette Cuevas, for an inspiring art show!
The artwork is truly beautiful.
Good choices in framing!

There are 26 original pieces of art work on display in the popular San Antonio restaurant, all by our Pleasanton artist, Jeannette Cuevas.  Definitely worth the trip!
Most of the  painting are figurative, relaxing with a book or fishing in the coast or some other sort of peaceful moment taken from a cowboy's life.    I have never seen one of her painting that did not touch me in some way.

We had the good fortune to sit directly in front of two of Jeannette's pieces.
I made sure I did not have my back to the pieces and studied them as I ate.
If anything makes me want to go home and paint it is looking at how Jeannette uses color and light in her paintings.

Not only is the art work worth the trip but the building itself that is the restaurant is charming.  Built in the 30's by the son of an English-born builder who had been collecting old broken bricks from the buildings he had previously built.  Upon returning home from college his son and a couple of his friends used the old broken bricks that would have otherwise been considered ruble and built the building that now is Cappy's.    In the 70's when it was suggested that the building be turned into a restaurant it was first thought to be too small and not easily visible to Broadway but Cappy's opened in 1977 and has been a popular restaurant in the Alamo Heights area in San Antonio.

If you have not seen her work you must see it in person to truly see what a gifted artist she is.