A Painting A Day: Beach Play

I must be seeking comic relief with all the stresses building up in my life during this transitional period between ending school and beginning summer; between moving my son's family in with me and moving out some of my own belongings, furniture and junk to make room for them.

All good things but still stress is involved.

I was inspired to complete this little painting some years ago but did not have it fully developed in my head.  My brother-in-law often stands holding his hands behind him.  I have seen him do it a million times and know this stance.  He may not even realize he does this but to me it is a signature pose for him.  I got a picture of him standing like that and decided to turn it into something comical so I changed his clothing and added a goofy hat, sunglasses and the creme de la creme the old man pot belly.
The man is no longer my brother-in-law but now some old man watching the kids playing on the beach adding just a touch of whimsy  and comedy to the composition without insulting anyone I know. 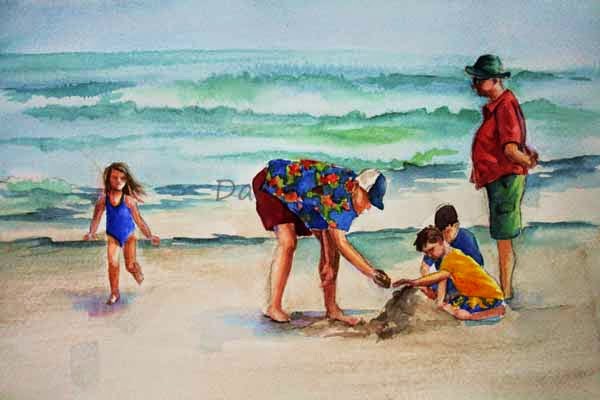 I have had a lot of fun with this one.
Another small quick study, intentionally leaving miniature people with no true facial features, just the illusion of maybe, having a face when in fact, it is truly only a dot placed just so.

Isn't that what our artistic expressions is for?
Art Therapy!
I can face the world now.